Every year, at the Opening Ceremony of the Transplant Games, the athletes from competing hospital teams across the UK are applauded into the venue with joyful, wide-eyed anticipation and delight.  Over 1,000 athletes, of all ages, and another 1,700 or more spectators.  Each team has their own loyal supporters, many are family members who have supported their athletes through much harder times.  The last people to enter the venue are the donor families.  Every year, however many times we’ve done it before, as the entire crowd rises to its feet with the loudest and longest applause of respect, honour and gratitude, there are tears.  These families, and many like them, are the reason our athletes are able to be here.  And the personal price paid so this moment can happen is beyond measure.   So, for your story, and on behalf of all those who stand in honour of donors and donor families in the Transplant Games stadiums, who clap until our hands throb red, and the many, many more whose lives are changed and immeasurably blessed by these bravest of decisions, thank you, Sharon and Nigel, and all those like you who give your greatest gifts.  Be proud… 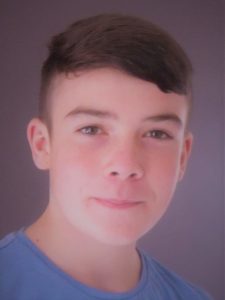 Nigel and I have been organ donors for years; I think we both signed up when we first got our provisional driving licenses. It is something that we have always been supportive of but with three children, 13, 11 and 6, it was never something that we had discussed with them. Nor had we considered organ donation in relation to them, the order of life is normally such that parents go first and you never expect your child to die before you. You never expect to have to make a decision about donating your child’s organs and you would not wish it on anyone.

Our son Oisín was fatally injured on Monday 9th February 2015. I can’t remember exactly when the organ donation team were first introduced to us, but I think that it was late on the Tuesday night/early Wednesday morning of that week. We did not want to talk to them at all. We didn’t even want to see them in the room. In our minds, Oisín was getting better and coming home with us so there was no point in talking to them about anything. But by Wednesday afternoon, the news that we had most feared was confirmed. Oisín had suffered brain stem death and that once life support was removed, he would no longer be able to breathe or function for himself. It is so traumatic to hear those words, to question the consultants about whether anyone had ever come back from where Oisín was before and then to have to tell his two little sisters and the wider family and community that he was never coming home. Never mind to meet and talk to the organ donation team about something that we had never considered, even in our worst nightmares.

Somehow, we managed to talk through and think about it and it came down to a few things. Firstly, one of Oisín’s best characteristics was his generosity of spirit, something that we knew about ourselves but also something that has been confirmed repeatedly since his death through other people’s experiences of him. We were sure that if Oisín was able to help someone out that that is exactly what he would do. The second thing that we knew was that if organ donation were the thing that could have saved Oisín’s life that we would have grabbed it with both hands. So then we thought about all the people in a similar situation and if we could stop one family going through what we were going through then it was the right thing to do. The final thing was, Oisín was never, ever coming back and whether we made the decision to donate or not, our beautiful boy was gone. Total heartbreak.

We had to talk to the girls and our immediate families about what we were thinking. We did not want to go ahead unless we talked it over with those closest to us. This was indescribably painful and earth shattering. Parents, siblings, cousins, grandparents, aunts and uncles, all reeling from the news they had received and then having to talk about organ donation. This is the most difficult time to have this conversation, in a room off the intensive care unit. Many people have not been able to make the decision at that time and we totally respect and understand that, as we have been there.

The promotion of organ donation is one of the three strands of the Foundation we have formed in Oisín’s memory. However, we are not about telling people what they should or should not do. We want people to talk about organ donation and to educate themselves about it. We encourage everyone to discuss organ donation with their families now, it is too difficult when the worst happens. We advocate that people should join the organ donor register but acknowledge that it is about choice and education also.

People often ask us what we think about Opt-out legislation, but for us it is more about changing hearts, minds and culture. Educating people and getting them talking about the benefits of organ donation and signing up because they understand it and know that it is the right thing to do. We also believe that discussion with families and making your families aware of your decision is vital. Organ donation saves lives. Because of Oisín, five people now have the gift of life. Including a young girl who was 11 years old when she received Oisín’s heart. This doesn’t change things for us but it certainly means that five families did not have to suffer what we do and that Oisín’s legacy lives on in those five people and the generations that will follow them.

Finally, a word about recipients. It is not an easy path either. The little girl who received Oisín’s heart was being kept alive using an artificial heart and was spending months on end in hospital. Recipients are very, very ill people who normally have had a poor quality of life for quite some time while they are on the transplant list with no guarantee of a match and no idea when, or if, it might come. That could be any one of us or one of our loved ones on the list, needing that second chance at life.

Life will never be the same without Oisín, but organ donation brings life from death and hope from tragedy and we encourage everyone to educate themselves, speak to their families and sign the organ donor register.