A Night of Celebration and Promoting Organ Donation 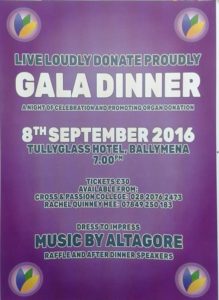 Who: Live Loudly Donate Proudly will be hosting this event for anybody who wants to come along, just get your ticket and come join in the fun!

What: This is a Gala Dinner, there will be food, music by Altagore, speeches and a raffle. It will be a wonderful night!

Where: At the Tullyglass House Hotel in Ballymena.

Why: We are holding this event in order to promote and celebrate the amazing gift of organ donation. The primary purpose of the event is not to fundraise, but any money that is raised, will be split between the Transplant Sport charity and the Northern Ireland Transplant Association. These are both hugely important charities for recipients and donor families, and it means a lot to have that kind of support, so we wanted to do anything we can to help them give it.

Tickets? Tickets can be obtained as follows:

The very first blog post on the Live Loudly Donate Proudly website! We are so excited and proud to finally be sharing the site with you all, and to be able to spread our message further.
Firstly, some details about the people involved in the campaign.

Live Loudly Donate Proudly is a campaign set up by Lucia Quinney Mee (me!) and a group of ten others. Noelle Hyland, a close friend of mine who is a sales rep, and very passionate about organ donation. Mary McAfee, an organ donation specialist nurse who works hard to promote the cause. Anne Henderson, an artist from Rathlin, who designed the cards and the logo. Jonathan Mitchell, a computer whizz, who works on all technical (and other) areas of the campaign. Alexia and Jeremy McCook, who sadly lost their son Craig, in a road traffic accident and who courageously and selflessly agreed to donate his organs. Karen Acheson, the sister of an Organ Donor who has also found some comfort in knowing that his organs have helped and saved the lives of others. David, Rachel and Alice Quinney Mee, my parents and sister, who feel very strongly about raising the profile of organ donation, and are the biggest and best support I could ever wish for. Which just leaves myself.

END_OF_DOCUMENT_TOKEN_TO_BE_REPLACED

Who: The Games are open for anyone who has had a transplant to compete in, but families and friends, and members of the public can take part in some events such as The Donor Run – a 5k or 3k run to celebrate all donors and donor families. There are over 700 competitors and over 1250 supporters!

When: The Liverpool 2016 Games begin on Thursday the 28th July and finish on Monday the 1st August.

Why: The Transplant Games are an opportunity for transplant recipients not only to compete in sporting events, but also to meet other people who have been in similar situations to them. It is an incredible feeling of togetherness and understanding to meet others who know some of what you have been through. The Games are also – and primarily – a chance to display our immense gratitude and thanks to all the donors and donor families, without whom none of the competitors would be able to do what we do, and the majority wouldn’t be here at all. We can raise awareness of Organ Donation, by showing people what it does – how much it can and does mean to people. It is an incredible weekend of sport, meeting new friends, and being thankful for where we all our in are transplant journey.

My story started shortly after I was born, September 1998 my mum had noticed my stomach was swollen and didn’t disappear. For many weeks we were turned away from our GP with antibiotics time after time, until finally enough was enough and mum decided to take me to A&E in the hope of getting some answers. They decided to do an ultrasound scan to see if they could find the cause for the swelling. Mum waited nervously for the results as would any parent, but she had no idea what she was about to be told. END_OF_DOCUMENT_TOKEN_TO_BE_REPLACED

Birmingham Children’ Hospital. Whilst I was too young to remember the initial impacts and the transplant itself, I have never taken lightly the impact that having a transplant has made to the life I live now. END_OF_DOCUMENT_TOKEN_TO_BE_REPLACED