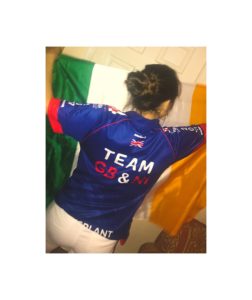 I have competed in three World Transplant Games now, and it has taken me until this most recent Games to post pictures of me in my team kit. My Team GB&NI kit. Being completely honest, I’m not sure why I never did before now. I think I have always been aware of how other people think about the question of nationality here in Northern Ireland…/north of Ireland/Ireland or whatever else we want to call this weird piece of land we live on.

People often have questions about the team I compete for, and why. Things like ‘So, you’re in Team Ireland yea?’ – nope. ‘How come you compete for GB?’ – well, because GB&NI is all one team. And the thing is, whether any of us like it or not, we are not in All – Ireland. The technicalities mean that Northern Ireland is treated differently in many contexts, including sporting teams.

The follow on from this is when people ask me, ‘but, aren’t you Irish?’… well, yes, I would consider myself to be Irish and I definitely feel Irish. However, again, the technicalities mean that I am part of Team GB&NI. And you know what; I am proud of that. I deserve to be allowed to feel proud of that fact. I compete with one of the largest, most successful teams in the World Transplant Games. We are a diverse, experienced team with some of the most incredible athletes and coaches and I have become a part of the family of Team GB&NI. I can tell you for sure that if I had the choice to join any other team – including Team Ireland – I wouldn’t (I might joke about it, but I wouldn’t actually do it) because of how included I feel in my current team.

So, I guess the question is, what has stopped me being more open about this in the past? I think people in this part of the world really hang on to labels and which ‘side’ they think people are on.

We still seem to live in such a divisive time, where the notion of our identity is so highly controversial that we struggle to get past it in order to work on other real, everyday issues.

Why is it that we cling so tightly to one word or the other, to a label that we think describes us? I have quite a lot of questions and not so many answers, unfortunately, but I think it is important to keep asking the questions. Maybe it will help those who are supposed to be in charge of this little country, to try and come up with better answers. Preferably answers that everyone can agree on and get behind.

I always thought of myself as someone who wasn’t really bothered by anyone else’s opinion or what others may or may not think or say about me. But I did find myself nervous to post pictures of myself in my kit with Union Jacks on it and Great Britain clearly displayed for everyone to see.

This year though, I have promised myself that actually, it really doesn’t matter what people think of me. The opinions others might have about how I live my life, the clothes I wear, the things I do or say – none of it really matters at all. As long as I can justify it all to myself and live with a clear conscience, then I won’t let it affect me anymore.

The thing is, I know that I consider myself Irish, so whether people perceive me as Irish or not no longer bothers me. Personally, I feel that the less we think about what nationality everyone is or feels that they are – the better off we would all be. Let’s stop allowing it to consume us so much.

Maybe there’s something to think about in this jumble of a blog, or maybe you aren’t reading anymore…just some thoughts for an Autumnal Sunday evening.