NHS Blood and Transplant manages the NHS Organ Donor Register and National Transplant Register, “…which lets us fairly match donors to people who are waiting for a transplant. Thanks to our amazing donors, we were able to facilitate nearly 4,000 transplants in 2019/20. This is fantastic, but there is still a lot more to do. There are currently around 6,000 people on the UK Transplant Waiting List. Last year over 350 people died while waiting for a transplant.” 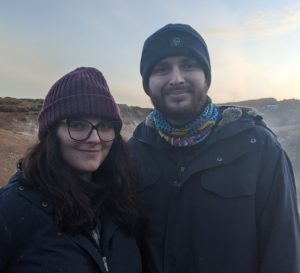 In Spring 2015 I had a third infection in my liver caused by Primary Sclerosing Cholangitis (PSC). PSC is a chronic condition that damages the bile ducts and liver. I had suffered and known about the condition for years and I was well aware that this was the trigger for a liver transplant assessment. I was 23 at the time.

I’d long got over the apprehension that comes when you initially hear about transplant. The surgery didn’t scare me, I had trust in my doctors. However, the waiting list depressed me. I pride myself on being a mentally strong person but being told I had 2.5 years to wait for a liver, when in the condition that I was in, was very difficult to deal with. It certainly took me a few months to come to terms with it before I could come back with my more usual approach of making the best of it.

I just felt awful at the time, I was jaundiced and bloated with fluid, itchy all of the time and unable to sleep. I was very fatigued and incapable of going back to university that year. I lived in TK Maxx pyjamas and was covered in thick heavy moisturiser to try and heal my skin that was damaged from the constant scratching. I don’t know how Eimear (my long term partner) put up with sleeping next to me when I was scratching all the time!

In hindsight it sounds very grim but in reality it was just the way things were. After the initial shock of the wait, I was roughly as happy as I had been in life before. The ambitions I had for a day were much lower of course but I concentrated on using the time when I did feel OK to spend time with Eimear and my friends. They really helped me.

My family planned a lovely trip away that summer, we spent a couple of weeks in Vancouver, Victoria and Seattle. It truly was a wonderful trip spent eating and chatting as a family. It was never said but we were making some last great memories in case I didn’t make it.

Upon my return from the trip, I started some cognitive behavioural therapy (CBT) as I recognised that I’d had a bit of a mental womble and should do my best to correct that. Especially with the assessment coming in November and your mental state being part of the criteria for getting put on the list. This was an excellent experience for me, it honestly changed my approach to many things in life. It really streamlined my thinking processes and stopped me ruminating on unhelpful topics. Concentrating on controlling what could be controlled and even just assessing whether my thinking/behaviour is helpful or not in any situation. I’d say I’m a significantly happier person now post transplant than I ever was before thanks to CBT. I don’t think it’s for everyone but at that time in my life I found it very useful.

Along with the help of Eimear and my family, coupled with advice from doctors and the dietitian we started to make a new plan to get me as well as possible for transplant. Pre-habilitation is now part of the transplant journey but it wasn’t in 2015! The best piece of advice I was given was to eat something every two hours. The liver is essential to the energy cycle in the body and some fatigue can be alleviated by simply eating more regularly. We got the fluid down with some medication and a low sodium diet. My skin was a battle but gradually improved and was something I learned to cope with.

I was assessed in November and we went through what to expect in the surgery. I always felt this was easy enough for me. I’d been having doctors poke and prod at me since I was 14 so I was well used to being in hospital and having procedures. Also, as the one having the surgery, I never had to see myself hooked up to breathing tubes etc. I’d just get to sleep through it all!

With that I was officially on the waiting list. Two and a half to three years wait was expected, however while being assessed we heard that living donation may be an option. My parents and my sister looked into it but were ruled out due to age or blood type. I thought that was the end of the matter. Unbeknown to me, my cousin Robert had got himself checked out and he was a suitable donor. After talking it through with his family, he made the decision to donate half of his liver to me. He told me in February 2016 that he wanted to do this for me and he was unwavering in that decision.

Obviously this changed my situation completely. We were given a soft date of the summer 2016 and it made everything so much easier. I was still prepared in case I got the regular transplant call but it gave me an end date to work towards and a bright shining light at the end of the tunnel.

Fast forward to October 2016 and we were scheduled to have the transplant on the 19th. Both my parents, Eimear and my sister came to Kings Hospital London. We had dinner with Robert and his family before we headed to the hospital. I waited on a bed and we sat as a family. At this point I was utterly confident that this was going to go well. Mentally and physically I was so much better than 12 months before. I spent those last hours before transplant reassuring Eimear.

Robert went into surgery first and I eventually got the nod to come down to the theatre. I walked down and they kept asking me the same questions; name, date of birth, what procedure are you having, why, etc. I’m sure I answered them all three times each on that short walk. We got to the door and I gave everyone a hug. It was extremely emotionally charged. Honestly, I’ve never felt more calm in my life. I’d prepared for that moment for over a year and I knew it was going to go well. I walked into the theatre and lay down, they administered the anaesthesia and that was it.

Apparently I was in surgery for 14 hours. My next memories are in ICU. I remember being terribly thirsty but they’d only allow me to sponge my mouth with water which was terribly frustrating! I remember seeing Eimear and my family for the first time, everyone exclaiming on my pale white complexion being back! I remember my back cramping up as I had to lie on my back for the first 48 hours to let the wound heal.

I was moved to Todd Ward. I initially experienced a little rejection as they tried to get my anti-rejection medication right. This is quite normal but wasn’t well explained to us initially. I was “pulsed” with steroids which makes you very chatty and energetic (and very high!). I got out of bed for the first time on Monday (surgery was Wednesday). My recovery all went well from then on. I walked more and more each day, my scar healed well, they got my Tacrolimus (anti-rejection) levels under control. Thank god for the Love Walk Café that saved me from having to eat hospital food all the time and I have great memories of getting a Theos pizza on the last evening!

Frustratingly I was unable to see Robert much, the person in the bed next to him in ICU had a dangerous fungal infection and he had potentially been exposed. He was not allowed to see me and Family members needed to shower after seeing Robert before they were allowed to see me. Robert had a lot of pain from his wound site but he didn’t have any further complications. He went home to Bedfordshire before I was discharged back to Belfast.

I was brought back to the Royal Victoria Hospital by private plane (great experience!) on the 4th of November. I was discharged home soon after. I went to my parents house as we’d thought that would be safest (less mould than student accommodation). We took the cleaning and avoiding people very seriously, I was all too aware of those stats that an infection in the first year increases 10 year mortality.

I was much better, much faster than we were prepared for. Recovery was very quick. My mum had taken time of work to look after me but found there wasn’t really much for her to do! I think because I’d been so ill before and was used to doing so little that it was very easy to deal with the recovery. I almost struggled more mentally with the fact that I could do things again. I was wary of signing up for things that would’ve been too much pre-transplant. Eventually that mindset changed and I got used to the new normal. Eimear and I got a new flat in January so I could escape home and we could get on with our lives.

Robert unfortunately had a tough time recovering. He had persistent pain from his wound site for years after the surgery. It really affected his job and his life in general. He does not regret his decision but I’m very wary about encouraging others to go down the living donor path. I’m eternally grateful for his sacrifice. It was such a monumental gift and courageous thing to do for me. It saved me years of waiting, suffering and potentially my life. It’s been tough to see him struggling. Things seem to have improved this past year as he has had a deep nerve stimulator implanted in his back that seems to be giving him relief from the pain and meant he can cut back his pain medications. I will always feel responsible for Roberts suffering but he reassures me that it was his decision and that he was aware of the risks. Perhaps it is karma, someone had to pay the toll for the years of suffering that I skipped.

Post-transplant, things have gone from strength to strength for me. I never knew people felt this good all the time! I’ve completed my Masters in Mechanical Engineering at Queens and I’m now working as a Design Engineer. I’ve raised over £50,000 for liver related charities. Eimear is now a qualified doctor and we’re engaged. We’ve many plans for the future.