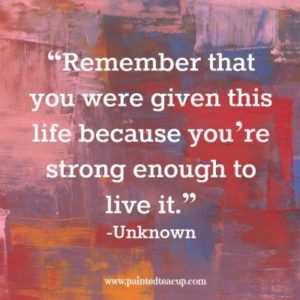 You have a headache and your friend asks if you want to go out. You say no sorry, I have this splitting headache today.

Your friend asks if you want to go out, but you’ve been feeling anxious all day. Is that what you say? Or do you make some other excuse?

I’m going to guess, partly because I know I’ve done it myself, that the reason you give for not going is not that you are anxious. Or that you’re just not feeling up to being sociable.

But why? Why do we make a distinction between our physical and mental health? Why is it that we don’t feel comfortable being honest and saying how we may be struggling?

Today is World Mental Health Day. A chance to remind everyone that it is absolutely okay to talk about your mental health. Its more than okay, its vital. It is the only way that the stigma and shame surrounding mental illness will be overcome.

Just because an illness is in your brain and not your body, it doesn’t make it any less real, any less serious or any less scary. Just because you can’t see it, doesn’t mean it isn’t there.

My own experience with mental illness over the last eight or nine years has taught me a lot. I would describe myself, actually, as unbelievably lucky and very fortunate. I have had the opportunity to be seen and treated by the very best psychologists, therapists and multidisciplinary teams that I have been able to build up great relationships with and put my trust in them.

There are a lot of people however, who are not as lucky as me, and who wait months to get an appointment with anyone, or worse never get referred in the first place. When talking about eating disorders especially, there are far too many people who are told that they are not ill enough, not underweight enough, they are not sick enough to be treated.

This is not the fault of the professionals. If they had the capacity, they would help everyone they possibly could. Unfortunately, they do not. Through cuts to funding, shutting down departments and generally not prioritising mental health, especially not that of young people, the teams must make tough decisions about who to give treatment to.

NONE of that is true, but that is what an eating disorder will do. It will twist the words into the most harmful things and try and convince your brain that is the case.

Its important to have people that you trust around you, that you know you can talk to when you need someone to be there. Its easy to feel locked in your own mind and sometimes you just need to talk it out.

Its normal to have a bad day. Its normal to not feel amazing one hundred percent of the time. It happens to all of us. But when that bad day becomes a bad week, a bad month, or your thoughts have an impact on your behaviours, that’s when it’s a good idea to speak to someone professional.

That doesn’t make you weak. Needing help doesn’t mean you’re not brave. In fact, it shows bravery, it shows courage to ask for help.

There are so many different forms of mental illness, and within that – everyone’s experience is totally different. Triggers vary and what helps one person may make another person feel worse. Be mindful of what you say to people, you never know what kind of battle they are fighting in their own mind.

To anyone who is struggling…please don’t feel alone or ashamed of what you are going through. Reach out for help. You CAN do this, but you don’t have to do it alone.

Know that times will get better.

‘The fire inside you burns brighter than the fire around you.’