On the ninth day of Christmas my true love gave to me… Nine Ladies dancing. 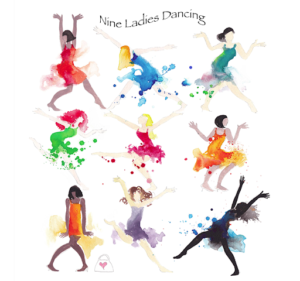 Music, dancing, and lots of it, seems a pretty essential part of many organ transplant stories, and not just for nine ladies.   Not for everyone, true, some aren’t always mechanically up for it, and a few others prefer to sit it out and watch (How do they do that?  They still twitch in time to the rhythm of the music even in their seats!) But for the many others…

Like a friend of ours who went through an unusually complex liver transplant which needed repeating immediately, her life held for a time by an incredible team of people and an ECMO life-support machine, doing the job of heart and lungs until she was able to do it herself. Many weeks in an Intensive Therapy Unit and then, within twelve months, a flame of energy, spinning for hours through a glittering disco, dancing the New Year in.

Like all those discos at the Gala Dinner nights at the closing of the Transplant Games.  Whether you actually get up and dance or not, it’s hard not to sing along with that unofficial Gala night anthem for one particular team –

No time for losers?  That line could do with a tweak for our context if Freddy Mercury and Queen wouldn’t mind.  Maybe they’d understand.  “No one’ s a loser.”  Not at the Games.  Before anyone even gets near the starting line, everyone is already a winner, a champion.  Each person, from the tiniest and newest to those with most years under their belts, has come through remarkable, even unspeakable trials to get to this point.  And those who may be last across the finishing line are as honoured and applauded as the first, the first ones home often cheering the loudest for the last ones to come in.

To see those who can collapse on a bedroom floor in tears of exhaustion and anxiety also take to the dance floor with exuberance and dance as though no-one is watching – though we all are – dance with a depth of honest, abandoned joy that couldn’t be sourced from anywhere but that deepest place of gratitude for each second’s gift of life, should be infectious enough for all of us.  Even those of us who don’t (normally) dance.  And the music is an experience of heightened awareness where every note, word, beat, every step on the dance floor, is a way of saying thank you.

“Dancing is, like, my thing.  Even before I had any kind of (illness)…I think I was always a very bubbly, bubbly person but it’s made it, multiplied it, like a million times over!  It’s…if I hear a song I like I just…I will not sit down…  And then you try and get other people up, and it kind of becomes infectious, I think, or at least I hope, you know?  I want to pass it on to people because when people are upset or they’re down about things or they’re just annoyed about the day… it’s…you’ve got to…I feel lucky, it’s almost, I feel, like it’s easier for me, to kind of not be annoyed about the day, and so I want to spread that and say yeah, you’re annoyed about the day but look at this! look at this! look at this! so you could be happy about these things, you know?  And it does, you know, the majority of time it kind of cheers people up – and that brings me even more joy!”

From the very First day of a transplant Christmas, a donor truly gives…the joy to fuel the dance.