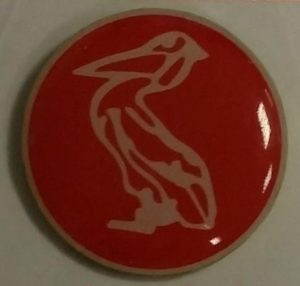 “A wonderful bird is the Pelican, its beak can hold more than its belly can…”, so the poem says.

The Blood Transfusion Services in Northern Ireland and in the Republic of Ireland have used the symbol of the pelican since they were formed.  It is inspired by an ancient legend about a mother pelican in a time of famine that fed its young with drops of blood from her own breast, and so saved their lives.  It is an image of generosity and self-giving that symbolises the kindness of today’s blood donors. Somewhere we have at least one silver and one gold pelican lapel pin in our family honouring blood donations, and a bright shiny red badge with its pelican symbol marks our new generation’s commitment.

It takes under an hour to donate a pint of blood, and only five or ten minutes of that is the actual blood collection.  Some paperwork and confidential questions to make sure you’re eligible. A good drink of water.  A tiny finger prick to check your haemoglobin levels are OK.  A blood pressure cuff on your arm and a small needle into your vein.  Ten minutes of relaxing while you gently donate down the tube.  Then there’s the cup of tea, or two, and a biscuit (six million are eaten after blood donations every year!).  And you’re done.  Helped save a life, or possibly three.  Really. Come back a few months later and do it all again.

Your one donation, one unit, can be split into red blood cells, plasma and platelets and each used for different treatments.  Two thirds will probably be used to treat medical conditions like anaemia, cancer, blood disorders, and the other third for emergencies and in surgery.

Each year, the UK uses about 2.5 million units of blood.  England needs about 5,000 donations a day, and about 135,000 new donors a year, to replace those who can no longer donate.

Or give a little more time and donate plasma, or platelets.  It all works the same way except with these two the blood isn’t just collected, it goes through a machine to separate the plasma, or the platelets, whichever you are giving, and the red blood cells go back into your arm.  Plasma takes about 40 minutes and platelets about an hour and a half.  (And rumour has it that the biscuits afterwards are more substantial.)

“But this isn’t organ donation, is it?” No, but it would be a very rare organ transplant that didn’t include some level of blood transfusion, and that’s from a whole network of generous donors.  And it’s something you can do so easily (nine out of ten first-time blood donors say it was as easy, or much easier, than they had imagined it to be).

So go on, have a chat about being a pelican…