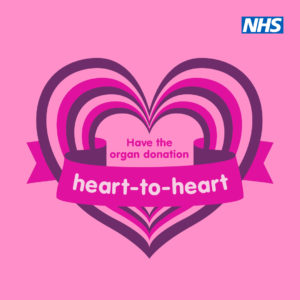 “It’s what? Organ Donation Week? Is it? Oh, that’s a great thing. I heard a story about that a while ago. Someone who had a transplant. Can’t remember what. Kidney or liver, maybe a heart, I’ve forgotten. Anyway, they went on to climb a mountain and win loads of medals for sport.  Amazing. I couldn’t do that, and I’ve still got all my original bits.

My mum told me there’s someone in our family had a transplant. Can’t remember who. Think it might have been a cousin of my mum. She said if they hadn’t had a transplant they wouldn’t be here now.

It’s really good they’re advertising it so more people get to know. I suppose there will be stories every day on social media about those that have been affected by it. That’s probably quite a lot of people when you think about it. Apart from the ones themselves, you know, the ones that actually have the transplants.  And the person the new organ comes from. Well, not new, exactly, used, but in good condition.

And that person’s family are really affected as well obviously, because, well, it’s their dad or brother or sister or cousin or someone close that’s dying whose organ might be used. That must be really hard.

I wonder how they start talking about whether they can use an organ from the person who’s just died.  I hope I’m never in that position. Must be a dreadful conversation to suddenly have to have in a hospital.

I’m happy to be an organ donor though when my time comes.  They’re not much use to me after I’m gone, are they, so if they can help someone else then that’s good with me. Not sure about my eyes though, think I’d rather keep them. I signed that bit on my driving licence ages ago so that’s OK. Anyway, they’ve changed the rules in some places now. England, Wales, and Scotland, they’re saying. Think they’re talking about it in Northern Ireland as well. That’s good.

So, I suppose that means we’ll all be organ donors now or could be when we die. That sounds better, I think. Must mean there’ll be loads of organs available. That’s great. Hope I never need one though, don’t think I’d be winning any medals afterwards.”

Have you ever heard a conversation like that? Or said any of it yourself? Good. Seriously, it’s a start, and there are a few things that could be helped with better information. There are others who have yet to start. Or aren’t sure how to. Once a conversation is started it’s easier to move it along. That’s what Organ Donation Week is about, amongst other things, starting, and informing, those conversations. So, wherever you start, keep chatting over these next few days and we’ll add some short blogs on the way.

If it’s all new to you, it’s great that you’re here.  Thanks for listening, and we hope you’ll find a few things this week that might help a conversation.

If you’ve had a transplant yourself, you’ve probably already been tangled up in these kinds of conversations in all kinds of places. Your story is a powerful treasure. Keep going, Live Loudly.

If you’re a donor, or part of a donor family, you’re a marvellous part of a miracle.  We are all more grateful to you than we can say.  Be Proud.

If you happen to be a transplant consultant or specialist nurse for organ donation or some other part of the transplant teams, you’re already doing a brilliant job, thank you immensely, and let us know if there’s anything you want to say!