Everyone has the choice as to whether or not they would like to be considered as a potential organ donor after their death.  In the UK, over one thousand people each year donate a kidney or part of their liver while they are still alive. Those donations are life-transforming for the recipients, their families and many more.  Thousands more lives are saved every day thanks to generous donations of stem cells, bone marrow, blood, blood platelets and plasma. In the first story we posted this week, Aaron received part of his cousin’s liver, a living donor.  To close we are delighted to hear from Alicia, and deeply grateful to her living donors who have given us the chance to be inspired by the wonderful young person she is.

So, if you have already had the conversation with your family about your wishes for organ donation after your death, and you’re keen to do more now, the good news is – you can.  To learn more, just click on some of the links in this article.  And if you still need persuading how miraculous and moving these living donor gifts can be (or even if you don’t!), just read on… 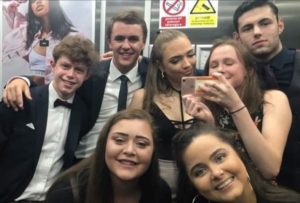 My story begins on the 18th May 2012, two weeks before my 11th birthday. My mum had taken me to the doctors again as she knew there was something not right. They did a blood test and a few hours later we got a call from the hospital to come in straight away. They said I was severely anaemic and that they needed me in hospital that night. We frantically dashed to hospital in Newcastle, me in my pyjamas as I was already in bed. My mum was told later that night when we got there that it was cancer.  A word that shattered mine and my family’s life. I was only ten years old and had lived a busy and normal life with school, friends and a lot of sport. From a young age I had a passion for the water and I loved the thrill of competition. I competed in triathlons and swimming galas regularly and earlier on that year I was placed third in the North East of England for my age in triathlon.

Life changed very quickly, and I became that sick kid with cancer. My life revolved around a hospital bed, chemotherapy, sickness, infection and a constant worry that my time was fast approaching.

My official diagnosis was Acute Myeloid Leukaemia, an aggressive and fast-growing cancer, and after a couple of rounds of intense chemotherapy it became apparent that my only real option would be a lifesaving bone marrow transplant. My parents were tested but sadly neither were a match. I was added to the Anthony Nolan register to find the perfect match, which was found only a few weeks later, or so we hoped. A 21-year-old male student from Germany who was willing to go through the procedure of donation for an eleven-year-old girl he had never met.

Unfortunately, only a couple weeks before I was due to start my conditioning treatment for the transplant, my life was rocked yet again. The cancer had spread to my skin and without complete remission the transplant would not be possible. I was then started on a very rare and new form of chemotherapy in a desperate attempt to achieve remission for long enough to get me to transplant day. It was decided that the best solution for me would be a pioneering double stem cell transplant using stem cells from umbilical cords. Finally, on the 11 October that year, in a very weak and sick state, I was lucky enough to get the transplant I desperately needed. I received both stem cell donations at the same time; all we were told was that one was an American donor and the other a UK donor. Sadly, I will never be able to extend my gratitude to these anonymous donors whose acts of kindness saved my life.

After a long and gruelling road to recovery my life began again. I walked without machines, I showered unaided, I got home, I started school, I began to eat again, I socialised and I went back to the pool. All these things I had once taken for granted became such big milestones and with them came a lot of happiness.

In the summer of 2014, I competed in my first ever British Transplant Games in Bolton and I loved every second of it. I met friends that have changed my life and will always be a part of my life. I competed against people whose bodies had also gone through what mine had and I heard hundreds of stories of bravery and tragedy but above all gratitude for a person who saved their lives.

I could not write this blog without mentioning Lucia. Lucia was one of those amazing individuals. Lucia was the embodiment of the Transplant Games, she lived her life with such grace, enthusiasm and so much laughter. She taught me, and I’m sure so many others, never to take life for granted, to appreciate simple things like drinking coffee and taking naps more, as well as the big stuff and doing what really makes you happy.

I am so passionate about the importance of organ and bone marrow donation because without it I know I would not be living this wonderful life.

Please, if you are reading this, think about your wishes for organ donation and discuss them with your family. You can use these links to find the Anthony Nolan Register and the Organ Donor Register.