I was born in Warwickshire in 2002, after 6 days my parents were told that I had kidney failure. The doctor said that I probably had polysistic symptoms, when they were asked would they like to have me transferred to Coventry (where I live) or Birmingham Children’s Hospital, they decided to choose BCH.
A few years past, luckily I didn’t experience dialysis and in 2006 my parents were asked about the potential of a live transplant.
In 2008 my father, gave me one of his kidneys.
This happened at Nottingham City Hospital, (BCH hadn’t any surgeons available) and I was then transferred back to BCH.
In 2009 Sara Clarke, the team manager of the Birmingham Courageous Heroes transplant team, asked my parents if I would like to join in with the team. My first games, coincidentally, was being held in Coventry, my home city.
From 2009 to 2015, it was a lot of fun, turning up at different cities across Great Britain and Northern Ireland, I enjoyed taking part in the running, ball throw, swimming and long jump. 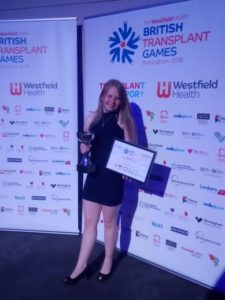 In 2016 I went to Liverpool at the age of 13 where I took all the events more seriously and after winning 5 Gold and 2 Silver Medals, I was chosen to represent the GB and NI Team in the World Transplant Games in Malaga in 2017.

This experience was truly amazing, and winning 2 World Gold medals was unbelievable, in the same year 2017, the British Transplant games were held in Lanarkshire, Scotland, where I took home a total of 8 medals.
So now in 2018, I’ve been to the European Transplant and Dialysis Games, in Sardinia Italy, winning 1 Gold and 3 Bronze and the overall trophy for the Best Female Transplantee, where I competed against adults as there were no juniors in the categories I had chosen. 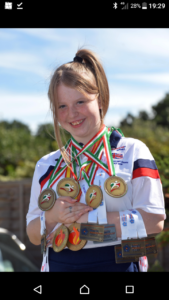 The journey from 2009 has been amazing, and to round this year off, the British Transplant games were held in Birmingham, to represent BCH on home turf has been a great experience. I came home with 6 Gold and 1 Silver medal and sharing the Best Transplant Sport, Best Child 15-17 years with two of my friends from the World Transplant Games has been wonderful. The games have given me a real passion for sport, a real purpose in life, something to look forward to each year, to see old friends and make new ones as well.
I believe without the Transplant Games, life would not be as good as it is at the moment, and without my father giving me his kidney none of this would have been possible, I’m extremely grateful for my parents, and for Organ Donation.

With best wishes
HOLLIE MAY SIMPSON.