On the third day of Christmas my true love gave to me… three French hens (and all the rest). 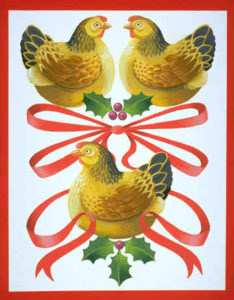 The gifts in the song may be a bit strange to our ears today but we know the idea. It’s a poetic sort of memory and forfeit game, like “I went to the market and I bought…” that goes round the room and each person has to remember what everyone else bought in the market before adding their own bit.  If you can’t remember everything on the list when it’s your turn there may be a forfeit.  Fun or embarrassing. Or both. Test of memory.

Try it. There’s no shortage of people to include.  The list is enormous. Longer than most of us will ever really know.  Local GPs and their staff, lab technicians checking blood samples (and more), admin staff, ambulance drivers and their teams, receptionists.  Porters, cleaning staff, maintenance teams.  Nurses.  Lots of different kinds and specialities, they’re not just nurses.  Never “just” nurses.  Doctors and consultants.  Radiographers, pharmacists, physiotherapists. And so it continues…

Looking back on a transplant, especially wondering who to thank, isn’t only a test of memory, it’s a real sense of wonder at everything that has to come together and play its part if that new chance of life is to be the best it can be. They say it takes a village to raise a child. Well, it seems to take a city to help with a transplant.

Lucia, 8 years young, after her first transplant, sitting in the ward with wide eyes as she thought of the next task she was setting herself, said “How am I going to thank all these people?  There’s so many!  Do you think I could write one big thank you letter and photocopy it for everyone?”

As for so many who receive the gift of an organ transplant, Lucia’s  life became her letter of thanks.  Though so much can never be paid back to so many, maybe it can be paid forward, including encouraging others, all of us, to think about being donors, and letting people know what we decide.