This year’s UK Transplant Games should have been held in Coventry but, like so much else, they became “Virtual” instead.  That was two weeks ago.  If all things had been different, even Lucia would have slept it off by now. 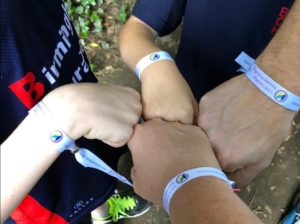 If it had all been different.  Slept off all that swimming pool training in the months beforehand.  Slept off the planning, preparation and plotting with friends soon to be together, swapping ‘FaceTime’ for real time, and slept off the bursts of social anxiety that could also put in an unwelcome appearance.  Slept off the exuberant reunions in hotel lobbies and the parade and the speeches and performances to declare the Games ‘open’, the late-night catch-ups, only shortened by the responsibility of long-awaited competitions.  Slept off the accelerated joy of shifting focus from hospital visits, medicines and bedside monitors for pools, tracks, speed clocks – and dancing. Slept off the tensions and responsibilities and sheer fun of making sure the younger children are in the right place at the right time, ready and excited to play their part and do their best in mini-Olympics, while others compete elsewhere on the golf course, the velodrome, the archery field.   Slept off the pre-swim tensions and the sudden explosion of energy from a diving start, racing through the water, pushing hard against the burn of effort and ‘the wall’. Shouting for colleagues, managing and encouraging the children in the team, cheering again and again, urging them on.  The Donor Run, 3 or 5K with 1,500 others, glossy, public evidence that organ donations transform lives. The first post-competition late night and midnight snacks are just for starters. Some snatches of kip at the side of the athletics track after the first children’s races and before other teammates need your moral boosting energy as they throw, run, jump through the day.  The race back to the accommodation, final choices over “pretty clothes” for the Gala Dinner and more preparation.  “Can I have the first shower?” “Where’s the iron?”  “Ooh, you look smart!” “And you look beautiful.”  The huge venue wearing its own finest attire to match its guests, so much coiled energy that should distract from appetites, but doesn’t.  A familiar MC feeding – and feeding from – a couple of thousand enthusiastic, excited celebrants, none more electric than those younger than twenty, well, maybe forty or fifty.  Or maybe those whose age is much closer to three figures.  And the awards. The expected and the surprises and the tear-jerking, heart-breaking, catch-you-off-balance recognitions of courage, kindness and camaraderie.  Those little phones frantically capturing and broadcasting all the spirit they can.  And then the dancing. So much dancing. Limbs that ached in the pool and on the track find new energy and bounce like Tigger for hours.  And the laughs.  So much abandonment to laughter.  Uninhibited singing to familiar beats and melodies from a whole flock of night birds. Snatches of intense conversations, half shouted confidences heard and understood even through the noise.  Tears and pains and fears and hopes shared amid it all.  Voices croak and strain under pressure.  Last buses back to hotels – but not for the young athletes.  There’s a long way to go yet and there’s always a taxi.  Or a long walk.  We’ll sleep later.  Live now.  Eventually, eventually, the collapse into bed before (just before) one last early breakfast and the final round of lingering conversations and laughs.  Quieter now, voices all but gone.  The packing, sort of.  Scooping everything up off the floor and squeezing it back into a bag but now with an extra T-shirt or two and at least one more hoodie, and probably some more medals. And the goodbyes. The thanks to the ones who, in their spare time, bring us all together and make it all happen. All those smiles and hugs and a few more selfies and the tears with “Bye for now, see you next time.” They take it out of you.   Donors honoured and thanked, some in person, all honoured by the passion and effort of these athletes of all ages and the ever-present song of gratitude in hearts that keep on beating. The momentum of the fun of it all may carry you for a little while longer, but soon the journey home gets quieter.  Then the fall into your own bed.  Medals on the floor. Memories stored. Life lived loudly, now sleeping it off.

We wouldn’t notice what Lucia was doing days later in the chair, curled up over her phone, until, quietly, “I’ve done a blog. Do yous want to see it before it goes up?” (Yous. Plural of you in Ballycastle.) Do we ever. Not about checking it for her, though the invitation was there. It was a privilege to be the first to read them. And they never disappointed. Sometimes they were received with tears, usually there were hugs. Always there was pride. And from Lucia quiet, constant commitment to what matters for her, and from her to her donors.

This time it’s different.  The Games were different too.  Virtual.  Creativity and activity all over the country.  “Meetings” on the web, social media sharing, photos, local supporters.  We swapped the company of around 1500 transplant recipients and families, donors and donor families, for a dozen friends and a rain soaked (but delightful) trot along the coast and quick plunge in waves on Lucia’s favourite beach. Swapped the Gala Dinner for some warmed-up pizza pieces from the night before and some quieter music.   It was good, but it wasn’t the same.  But this is always the same, the gratitude for the donors.  Without them, without their families, none of that could be for any of us.  Now we hope there will be donors for others who need a chance to live and live more fully.  You’ve probably already had the conversations about organ donation with your family.  Just checking.  You could always prompt one with somebody else.  You may help someone else get to the Transplant Games and have another glorious weekend to sleep off.  So sign up, and if you already have, be proud of it. 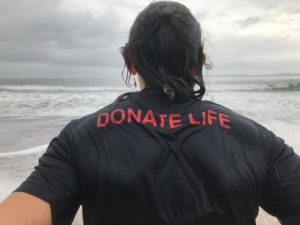