This week, it’s thirteen years since the generous gift of a donor and their family gave Lucia a new opportunity for life.  The same day marks six months since Lucia died, a few months after her 4th liver transplant and just 4 days before her 21st birthday.  Even with this immeasurable loss to our family and friends, Lucia’s light and energy continue to inspire and give strength.

Volunteer Now (Northern Ireland) have generously honoured Lucia’s life and work by creating a new award for young people’s campaigning. On 19th November the winner of the Lucia Quinney Mee BEM Award for Campaigning was announced.  These first paragraphs are taken from the participation of Lucia’s family as the Award was announced.   And then the voice of the award-winning young campaigner…thirteen year old Anna Neal from County Down.

“Through the years of her campaigning Lucia was given several awards and every one of them she found astonishing.  “What, me?  Wow!”

No award she was or could ever be given would match the gifts from her unknown organ donors that gave her life and the sense of immense gratitude that created in her.

But winning awards was not what Lucia set out to do.  Lucia designed much of her formal campaign, Live Loudly Donate Proudly, in her room on Ward 8 in Birmingham Children’s Hospital, a few months before her 3rd liver transplant (2015).  Aware that the clock was ticking for her and no one could know how much time she would have, Lucia wanted her gratitude to her donors to make a difference.

Wanted to make a difference to the lives of those in need of transplants so they could live their lives with a new opportunity, to enjoy their lives, their families and friends, with the joy, gratitude and enthusiasm that Lucia enjoyed herself. Live Loudly.

Wanted to make a difference for those who would consider organ donation, to encourage them to speak with their friends and family because they are the ones who would need to make the decision, give permission, if the moment arose. To encourage us all to be donors, blood donors, stem cell and bone marrow donors, living donors and, if circumstances made it possible, donors at the point of dying. And to do that Proudly.

Lucia wanted to make a difference.

And she did and continues to do so.  There are ripples beyond Lucia’s life that we will never see, and her impact is more than Lucia could ever know.

Lucia’s commitment was recognised and supported by others. She was given awards for what she did. Yet Lucia was always astonished when that happened. They were unsought, unexpected and, as Lucia said on more than one occasion, unreal, surreal.

Lucia was proud when she received her BEM in Hillsborough Castle. We all were. But she was even more proud and excited when the Gala Dinner she organised with her sister Alice and their friends brought more names to the donor register, more conversations within families, and more funds for the hospitals and the mental health unit so special to us all.  Proud to know that, partly as a result of conversations she provoked in her own remarkable way, lives have been saved and changed.

She would be proud to know that conversations she started with the Education Minister a few years back were continued a few weeks ago with the Minister and with key staff from the Education and Health Departments, taking us much closer to her goal of having the wide topic of organ donation included on the National Curriculum in Northern Ireland.

This award would be a great moment for Lucia.  To win an award is an honour. To inspire, encourage and strengthen another person to lift their own voice, to believe in themselves and to make a difference is a better award still.

She would be thrilled for the winner, full of congratulations and encouragement for her commitment to the work she is doing and proud to be some inspiration to another young voice.  Congratulations Anna, over to you…!” 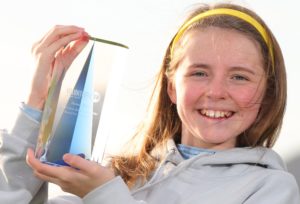 Lucia’s campaign was to “Live Loudly”, which to me, means to embrace opportunities and seize the moment, however long that moment may be. I was honoured to win the Lucia Quinney Mee Award for Campaigning, an award which recognises young people campaigning to make a difference. In 2018, I founded ‘Protect Our Pristine Seas’, a beach cleaning organisation. My journey started in 2016, when I met Lisa the dolphin, while on holiday in Dubai. My family and I were educated about the threats that our oceans face. Since then, I have had a passion for the ocean and have wanted to make sure that they are preserved for future generations. The ocean is a crucial part of life on this planet. Many people’s lives revolve around the oceans and we are the only ones who can save them. The oceans are not only home to hundreds of thousands of unique species, but they also provide around a quarter of the world’s oxygen. If that isn’t a good enough reason to save them, I don’t know what is!
In my time campaigning, I have completed 20 beach cleans, won two awards, represented my school in two eco events, and have been interviewed by Joyce Ferder Rankin for her documentary, Degrees to Extinction, but I am not finished. We are at a crucial time for the environment.
I believe that campaigning is so important, especially for children. It enables us to have our voices heard, to become significant in a world of 7 billion people. Our priorities are maybe different and our motivations are different to those of politicians and leaders.
Lucia had a mission that young people’s voices should be heard, since through her campaign lives were saved by the increased awareness of organ donation. Maybe increasing awareness of environmental issues might help to save our planet.
I am an extremely grateful recipient of this award, and to all who read this blog, remember, there is no Planet B!
Bye,
Anna Neal 🙂